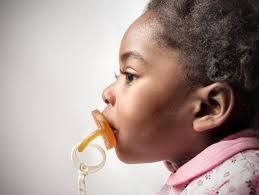 Teething: What To Expect

Somewhere between 2 and 12 months (or later), your baby’s teeth will make their grand, grumpy entrance. Here’s how to read the symptoms of teething along with remedies to ease baby’s discomfort.

When your baby’s first tooth shows up, you might be taken by surprise (“Ow! Was that just a bite?”), or you might just finally understand what all those surefire teething signs — drooling, night waking, crabbiness — were pointing to. Every baby experiences teething differently: Some have virtually no symptoms, while other babies experience teething pain for months. Fortunately, there are some signs to watch for as this developmental milestone approaches that can help make teething easier for your baby — and for you.

When Do Babies Start Teething?

In What Order Do Teeth Appear?

The most common first teeth are the two in the bottom center, followed by the two in the top center. Then, the pattern goes outward with lateral incisors, which are in the next spot over, followed by the first molars, or the molars closest to the opening of baby’s mouth. Then come the canines on either side of the lateral incisors and last are the second molars in the very back. See the American Dental Association’s tooth eruption chart.

Your little one is not likely to understand why he feels so achy, why he keeps waking up in the night with soreness in his mouth or why his chin is so itchy. So here are top teething symptoms to keep an eye out for:

The type and severity of these symptoms vary wildly from baby to baby — for one baby, teething means lots of discomfort and big-time tears, while another child might breeze right through to a mouth full of teeth without a complaint.  Still, you can expect to see at least some, and maybe many, of these symptoms (some of which can precede the actual appearance of a tooth by as much as two or three months — so hang in there Mom!).

While you can’t take on your baby’s teething discomfort, you can help take it away with these mom-tested remedies:

What not to worry about: Teething can cause bleeding under the gums, which may look like a bluish lump in baby’s mouth. It’s nothing to be concerned about and can be relieved with cold counterpressure using a cool wet washcloth.

While some parents swear that low-grade fever and diarrhea are teething symptoms, doctors are divided on whether that’s true. But like inflammation anywhere else in the body, inflamed gums can sometimes produce a low-grade fever. So if your little one does develop a temperature of less than 101 degrees while he’s cutting a tooth, it could be caused by inflammation of the gums and is not a cause for concern. If the fever continues for more than three days, or if it’s higher than 101 degrees or accompanied by any other symptoms of illness, call your pediatrician. The same goes for diarrhea, which some parents speculate can be caused by all the extra drool that gets swallowed when a baby is teething. It’s nothing to worry about, but if it lasts for more than two bowel movements, give your child’s doctor a call.

The Benefits of Playing Outside For Early Childhood Development

What Are Some Family-Friendly Activities You Can Do This Spring in Eden Prairie, MN? If you're look

If you're looking for the best elementary schools in Brooklyn Park, MN, then look no further! Here a

When exposed to this rich linguistic environment, your child isn’t just learning a second language, he or she is also developing intellectually.